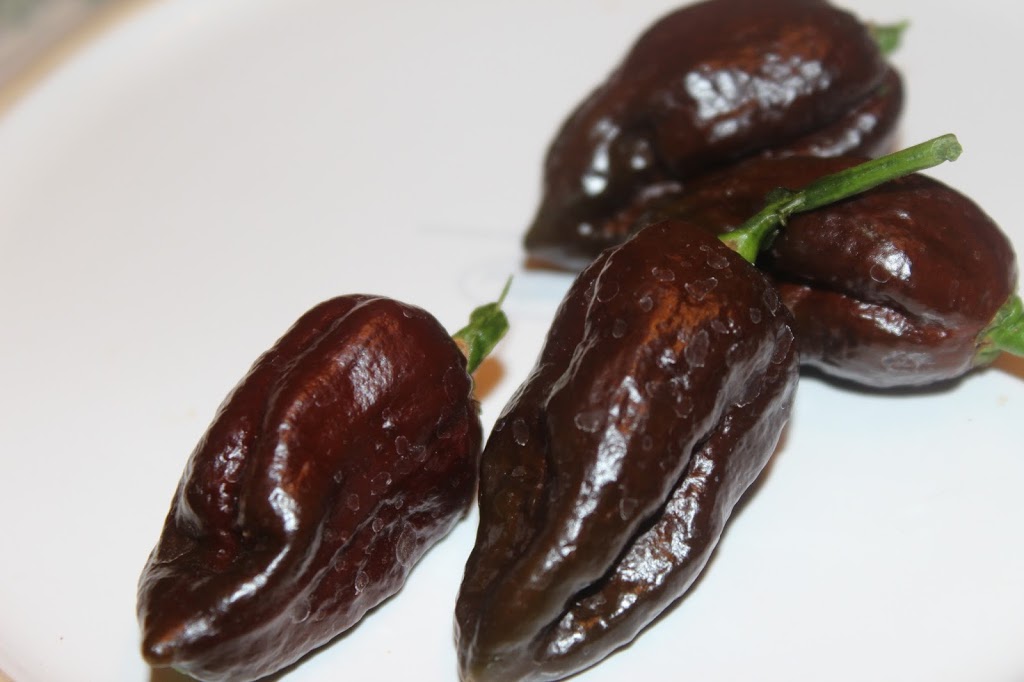 Why is it that some of the worst ideas start out with the words; “Let’s build a ramp!”

Remember the kids you hung out with when you were twelve or thirteen?  We all knew that one kid.  The adrenaline junkie who’s somehow already bored on the first day of summer.  Yup, that kid.  So of course he’s the one who pipes up “hey, I got an idea… let’s build a ramp!”

Think back to the kid that shows up every year on the first day of school with an arm cast or new scar to show off… that’s the kid!

Now, think of the Chocolate Bhutlah pepper as the food version of “let’s build a ramp.”  Not to say that this pepper is a bad idea, but, it has the potential.

How hot is the Chocolate Bhutlah?

The dark brown, glossy exterior from 2.5 to four inches in length helps the Bhutlah come off as really quite beautiful and benign.  But cut into
this bad boy, take a whiff, and the intense smell and over powering vapors should be warning enough.  Even so, the internet is full of “ramp builders” who chomped the entire pod off of the stem as a challenge and fully regretted it.  A penny sized piece packs more than enough heat for any salsa or chile recipe.  A little of this pepper really does go a long way.

How does the Chocolate Bhutlah taste?

Flavor wise, the Chocolate Bhutlah has a fantastic smokey, floral-ness to it with an off the chart heat that sizzles for upwards of twenty minutes or more.  Seriously.  This burn lingers.

By now you’re  probably shaking your head at the thought of ever introducing this “king of the super hots” into your garden.  That’s fair, but consider alternate uses for this pod such as in a spray to deter squirrels, birds, deer, neighbors or whatever from your other plants.  If nothing else these pepper pods are a definite conversation starter.

How long does it take to grow?

The Chocolate Bhutlah, like all other super hot peppers, is a late season producer.  And by late I mean the kids have been back to school for almost a month already and I’m just now getting ripe pods.  In other words, you need to be patient because these peppers take upwards of 110 days or more. The plants themselves are quite productive though, given our dry climate and cool nights, and I expect a minimum of 20 pods off each of the two plants I started.

When to Plant Tomatoes and Peppers in Denver